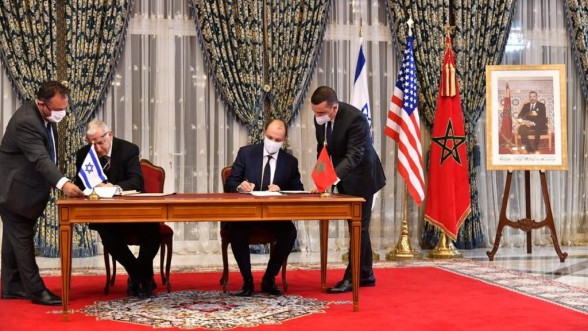 The Kingdom of Morocco and the State of Israel signed, on Tuesday in Rabat, four agreements in several areas during the visit of the high-level American-Israeli delegation.

The first agreement concerns the exemption from visa formalities for holders of diplomatic and service passports. It was signed by the Minister Delegate for Foreign Affairs, African Cooperation and Moroccans Abroad Mohcine Jazouli and Shlomo Mor-Yosef, Director General of the Population and Immigration Agency.

Recognizing the importance of ensuring direct flights between Israel and Morocco, the two sides pledge to engage in talks for the conclusion of an Agreement on Air Services.

In addition, a memorandum of understanding on Innovation and the development of water resources which provides for technical cooperation in water management and development, was signed by Hammou Bensaadout, Director General of ‘Water at the Ministry of Equipment, Transport, Logistics and Water, and Yechezkel Lifshitz, Director General of the Ministry of Water Resources.

A fourth MoU on the promotion of economic relations provides for cooperation in the field of Finance and Investment, and for the negotiation of other agreements, including on non-double taxation,  on the Promotion and Protection of Investments and on customs assistance.

This MoU was signed by Nabyl Lakhdar, Director General of the Administration of Customs and Indirect Taxes, and Shira Greenberg, Chief Economist at the Ministry of Finance.