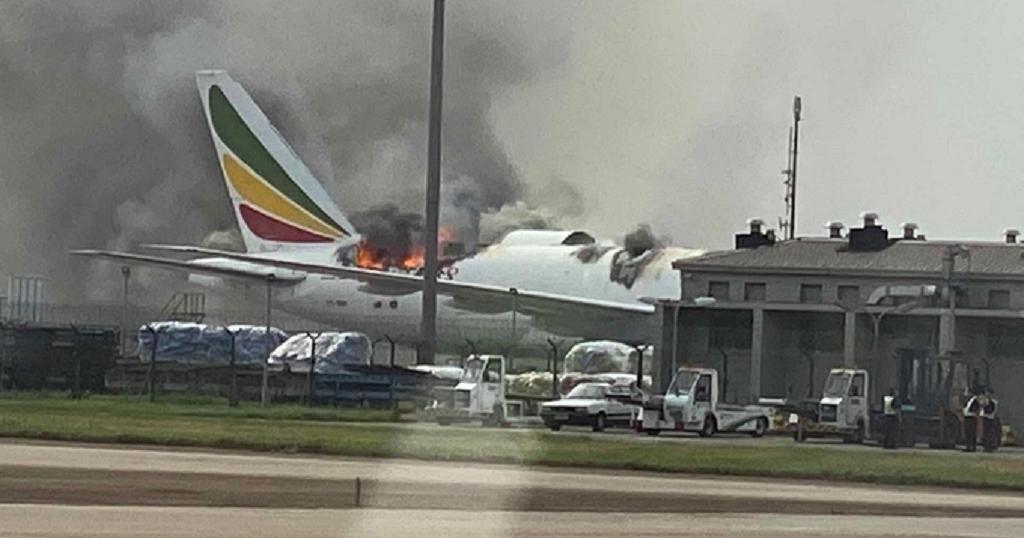 An Ethiopian Airline cargo plane caught fire in China, an aviation news tracking portal reported on Wednesday morning. The incident involved Ethiopian Airlines 777F which was parked at the Shanghai Pudong Airport. The blaze was centralized in the fuselage area.
“The aircraft is thought to be ET-ARH, a 5-year old 777 Freighter. It arrived from Brussels at 11:51 (GMT+8) and scheduled to depart to Brazil’s São Paulo GRU,” the portal added.
The fire department at the airport immediately set out to douse the blaze as a number of ground staff looked on. According to a statement issued by the airlines, the aircraft was on a regular scheduled cargo service from Shanghai to Sao Paulo-Santiago.
“All ground staff and flying crew are safe. Ethiopian has collaborated with all concerned authorities and contained the fire,” the statement added.
Ethiopian was one of the key global airlines that continued active operations during the height of the coronavirus pandemic. The airline opened a special cargo pharma wing to help in global delivery of supplies during the pandemic.
“We have the most extensive cargo network, the largest fleet, the largest cargo terminal, the most interconnections. I am optimistic that we will definitely return to normal. Our long-term strategy remains unchanged,” Tewolde Gebremariam, Group CEO of Ethiopian is on record to have said.
The airline also played a crucial role in the repatriation of citizens from Africa to other parts of the world and vice versa. It has in the past weeks announced return to the skies for passengers as most countries reopen their skies.
Ethiopia Airlines is Africa’s largest airline in terms of passengers carried, destinations served, fleet size, and revenue. Ethiopian is also the world’s 4th largest airline by the number of countries served.