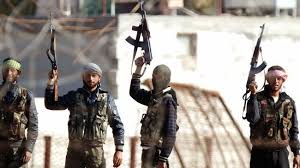 A Lebanese soldier was killed Monday after some gunmen opened fire on an army patrol and army positions in several areas across the Baalbek region, reports say.
The military command neither revealed the identity of the attackers nor apprehended them but said number of armed (men) fired at a patrol belonging to the army and military centers – which led to the martyrdom of one of the soldiers.
Killed soldier is Ali al-Afi, was a Baalbeck native and a father of one child.
In a separate report, The Daily Star also said wanted Lebanese citizen “Abbas Al-Masry” fired shots into the air while attempting to force his way through a checkpoint in Baalbek City, hours before the Baalbek region incident.
Soldiers at the checkpoint retaliated injuring Al-Masry and his companion. Both were admitted to hospital for treatment.