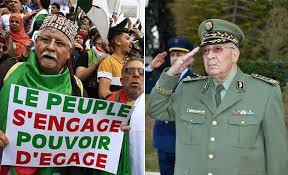 The Algeria President Tuesday renamed the Algerian army’s headquarters after late Chief of State Gen. Ahmed Gaïd Salah who forced former leader Abdelaziz Bouteflika to step down in April last year and led the country until the presidential election in December.

A statement by the Ministry of Defense said the renaming is in recognition of the considerable efforts of the late Chief of Staff during “glorious liberation uprising within the ranks of the National Liberation Army as well as of his contributions after the independence, in the building of the National Popular Army.”

Gaïd Salah as Chief of Staff and deputy Defense Minister, in the heart of the Hirak, the democratic uprising which broke out in February last year, forced Bouteflika to resign after 20 years in power, and led the country until December presidential elections.

He died at age of 73 from a heart attack on December 23 after the new president was sworn-in.