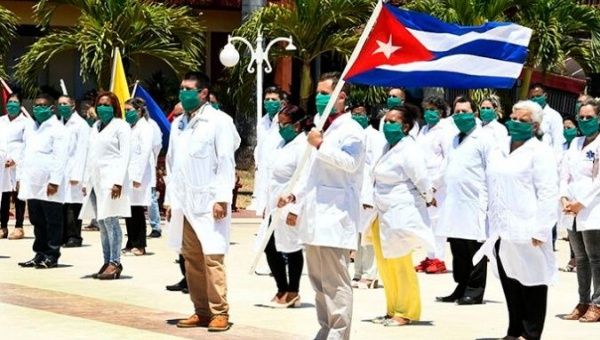 U.S has castigated Qatar after it welcomed Cuban doctors to help in the Gulf country’s efforts to curb the covid-19 pandemic, as it accuses Caribbean of exploiting its doctors, The New Arab reports.
Secretary of State, Mike Pompeo sent the tirade to the Gulf ally Wednesday to express Washington’s discomfort over the presence of Cuban doctors in Qatar.
“We’ve noticed how the regime in Havana has taken advantage of the Covid-19 pandemic to continue its exploitation of Cuban medical workers,” said Pompeo during a press briefing.
“We applaud leaders in Brazil and in Ecuador and Bolivia and other countries which have refused to turn a blind eye to these abuses by the Cuban regime, and ask all countries to do the same, including places like South Africa and Qatar,” he added.
“Otherwise, when they pay the regime, they are helping the Cuban government turn a profit on human trafficking,” he said.
Qatar early last month announced the arrival of a batch of the Cuban doctors after a request was made to Havana. Dr Abdullatif Al Khal, co-president of Qatar’s national pandemic response team, praised the “excellent” doctors from “friendly” Cuba, the London-based news outlet reports.
Cuba which has been under a decades-long US trade embargo, is global renowned as one the leading countries in healthcare. Present at the forefront during previous disasters, Havana amid the covid-19 also sent medical doctors to Italy, China including several other countries around the globe.