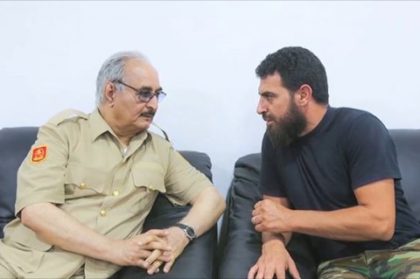 East-based Libyan rebel Gen. Khalifa Haftar has assigned a close aide wanted by the International Criminal Court (ICC) to recruit fighters near Tripoli, reports say.
Field marshall Haftar who declared himself the rightful ruler of Libya early this week has assigned Mahmoud Al-Werfalli to enlist new fighters for Haftar’s so-called Libyan National Army (LNA) opposed to UN-backed Government of National (GNA), Anadolu news agency reports citing Libyan sources close to the east-based war lord.
Al-Werfalli reportedly went to to Bani Walid province, south of Tripoli, with a large amount of money to recruit more soldiers.
ICC in 2017 issued an arrest warrant for the head of Saiqa Special Forces aligned with the LNA for his involvement in the execution of about 33 bound captives in cold blood, in Benghazi, during the capture of the city in July 2017 after nearly three years of combat.
Several videos emerged showing Werfalli participating directly and indirectly in the execution of Islamic State group (IS) suspects.
After the photos emerged, Haftar reportedly ordered the arrest of his aide and pledged cooperation with Hague-based court but Werfalli was accused again in 2018 by the UN for being behind another “brutal and outrageous summary executions” of at least nine prisoner in blue jumpsuits in front of Bayaat al-Radwan mosque, in Benghazi.
Haftar’s forces have been stuck on the outskirts of Tripoli in their push to topple the GNA. The operation launched in April last year has recently received major blows as the UN-backed government with help of Turkey, Qatar and several Syrian mercenaries managed to recover several towns lost to the LNA.