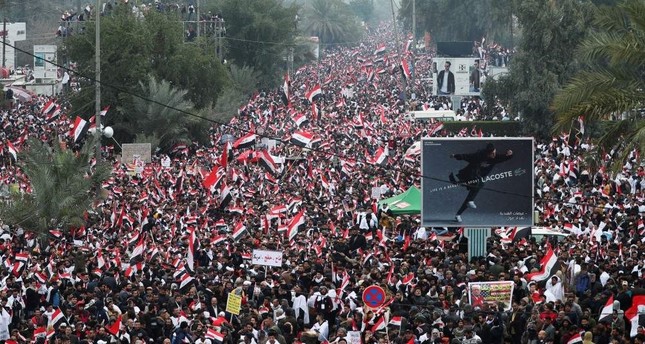 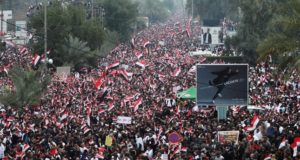 Tens of thousands of Iraqis have begun Friday flocking in capital Baghdad for a “million-strong march” called by popular cleric Moqtada Sadr who has demanded the withdrawal of US forces from the country following the assassination early this month of Iran’s top military commander Qassem Soleimani and the deputy leader of Iraqi Iran-backed paramilitary forces, Abu Mahdi al-Muhandis.

Iraqis, men, women and children from various cities began at early hours of Friday gathering in the Jadiriyah district of east Baghdad, near the city’s University.

Thursday, in buildup to the demonstration, Sadr who controls the largest block in the parliament urged Iraqis of various ages to join the protest in view of defending the country’s independence and sovereignty.

“Oh women, men and youth of the country, the time is now upon us to defend the country, its sovereignty and dependence,” the Shiite cleric said in a Tweet.

“Spread the word of an independent future Iraq that will be ruled by the righteous; an Iraq which will not know of corruption nor aggression” he added, calling on Iraqis to expel the “tyrants”.

The call came after Soleimani and Muhandis were assassinated in US airstrikes at Baghdad airport early this month. Iran and Iraq condemned airstrikes. Iran vowed revenge and fired few days later a dozen missiles against two military bases controlled by US forces.

There are about 5,000 forces stationed in Iraq following the US invasion of the country in 2003.

The Iraqi parliament two days after the air strike passed a resolution demanding the American forces to leave.

President Donald Trump threatened Baghdad with sanctions if US forces pull out from the Iraqi territory.