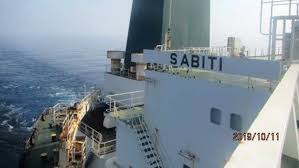 An oil tanker operated by the Iranian state-run oil company was set ablaze Friday off Saudi coast after two missile hit it.

Iranian authorities identified the vessel as Sabity. It was according to National Iranian Oil Company (NIOC) near the Jeddah port city of Saudi Arabia. The strikes damaged the two main storage tanks causing oil spill into the Red Sea.

Tehran has not named any culprit neither has any one claimed responsibility of the attacks. However the US said it was aware of the attack.

Lt. Pete Pagano, a spokesman for the U.S. Navy’s 5th Fleet overseeing the Mideast, said authorities there were “aware of reports of this incident,” without giving any other details.

The Mysterious attacks came less than one month after Saudi Arabia, the USA and several western countries blamed Iran for drone attacks on two Saudi oil installations that disrupted the global oil supply.

Iran rejected the blame but its proxies in Yemen, fighting the internationally recognized government and the Saudi-led coalition, has claimed responsibility.

Commentators think that Friday’s incident could push tensions between Iran and the US even higher, more than a year after President Donald Trump unilaterally withdrew America from the nuclear deal and imposed sanctions on Iran.