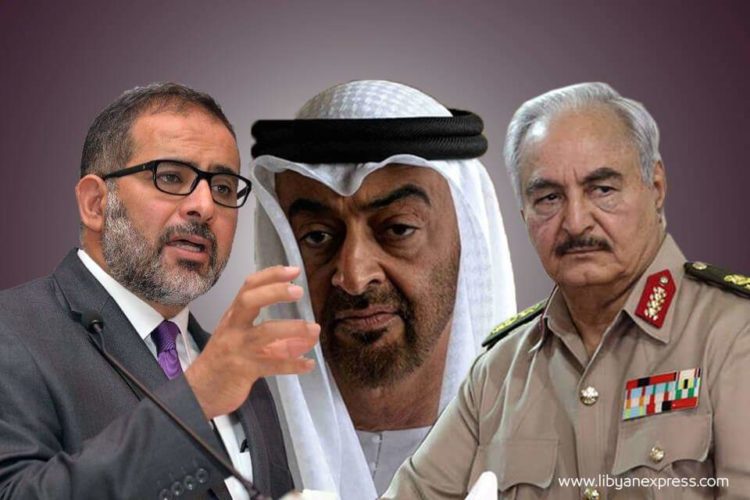 United Arab Emirates, UAE, have chosen to let down Khalifa Haftar, their man in Libya, to be replaced by current Libyan ambassador to the Gulf country after the military commander failed in his move to take Tripoli in an offensive he launched early April, reports say.
Abu Dhabi, Libya Express reports citing local TV channel Al-Ahrar has asked the country’s controversial parliament in Tobruk to appoint former ambassador to the Gulf country, Aref Al-Nayed as New Prime Minister of Libya’s east-based rival government to UN-backed Government of National Accord (GNA).
Al-Nayed, according to the media will also become the UAE’s key man the oil-rich country, in replacement of Haftar. The military commander reportedly fell from grace due to his inability to take control of Tripoli after three months of military offensive backed Abu Dhabi.
The offensive has met strong resistance from the GNA-aligned forces mainly made of militia groups.
Haftar has found himself under intense international pressured calling for an end to the military operation which has hundreds of people including at least 50 migrants killed last week in air strike carried out by Haftar forces, last week.
The offensive sabotaged UN efforts to close the gap between two rival governments. The GNA has ruled out embarking on any future dialogue involving Haftar that it branded “criminal”.
The aim behind Abu Dhabi’s push for Haftar’s replacement according Ashraf Al-Sheh, a member of GNA-aligned High Council of State (HCS) is “to strike new deals with the GNA with this new government headed by Al-Nayed with Haftar in the background.”