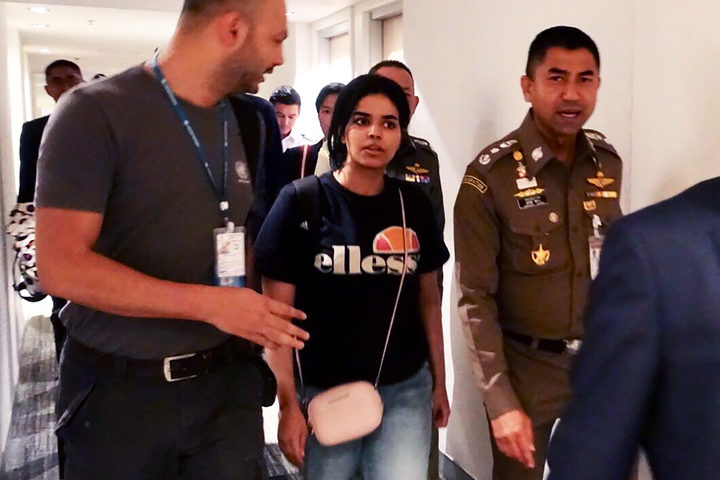 The Saudi embassy in Bangkok has denied reports that it requested the deportation of the Saudi young women seeking asylum in the Asian country after running away from her parents during holidays in Kuwait.
“The Kingdom of Saudi Arabia has not asked for her extradition. The embassy considers this issue a family matter,” the embassy said in a post on Twitter.
Rahaf Mohammed al-Qunun arrived Saturday in Thailand from Kuwait where she was on holidays with her family. The young woman locked herself up in an airport hotel room to prevent Thai authorities from sending her back.
Qunum hoped to be granted asylum in the Asian country before she flies to Australia that she earlier planned to travel to as she ran away from her parents.
The United Nations refugee agency (UNHCR) Tuesday interviewed her in a view of helping her get asylum documents that can enable the Saudi citizen stay in Thailand, reports say.
“It could take several days to process the case and determine next steps,” UNHCR’s Thailand representative Giuseppe de Vincentiis said in a statement.
“We are very grateful that the Thai authorities did not send back (Qunun) against her will and are extending protection to her,” he said.
Qunum upon arriving in Thailand told Reuters that her life is in danger.
“They will kill me,” Qunun told Reuters.
“My life is in danger. My family threatens to kill me for the most trivial things.”
Her father according to Thai authorities arrived in Bangkok in view of talking with her daughter.
“The father and brother want to go and talk to Rahaf but the UN will need to approve such talk,” said immigration chief Surachate Hakpan.
The presence of the father has ignited concerns for activists and human right groups which fear that Thai authority could be forced to reverse their decision and expel the young woman.
“The father is now here in Thailand and that’s a source of concern,” Phil Robertson, Human Rights Watch’s deputy director for Asia, told Reuters.
“We have no idea what he is going to do … whether he will try to find out where she is and go harass her. We don’t know whether he is going to try to get the embassy to do that.”