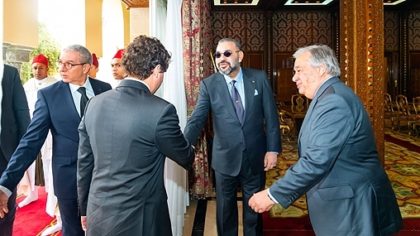 UN Secretary General Antonio Guterres, who was received Tuesday in Rabat by King Mohammed VI, commended the constructive role played by Morocco in boosting South-South cooperation based on solidarity and shared interests.

Mr. Guterres arrived on Sunday in Marrakech to take part in the UN conference on migration marked by the adoption of the first ever-global agreement pledging to ensure a safe, orderly and regular migration.

After the closing ceremony of the UN conference, King Mohammed VI welcomed the UN Secretary General who thanked the Sovereign for the “successful organization” in Morocco of the Global Compact on Migration (GCM) crowned with the adoption of the “Marrakech Pact”, says a statement issued by the Royal Office.

The UN chief also lauded the country’s contributions and steadfast commitment to peacekeeping operations, particularly in the Democratic Republic of Congo and the Central African Republic.

Talks between Mr. Guterres and the Moroccan Monarch also covered the situation in the Maghreb region, Africa and the Sahara issue in the light of the 1st round-table meeting held in Geneva Dec. 5-6.

King Mohammed VI availed this opportunity to reaffirm Morocco’s firm support to the efforts made by the UN Secretary General and his personal envoy to reach a final political solution to the Sahara regional dispute.