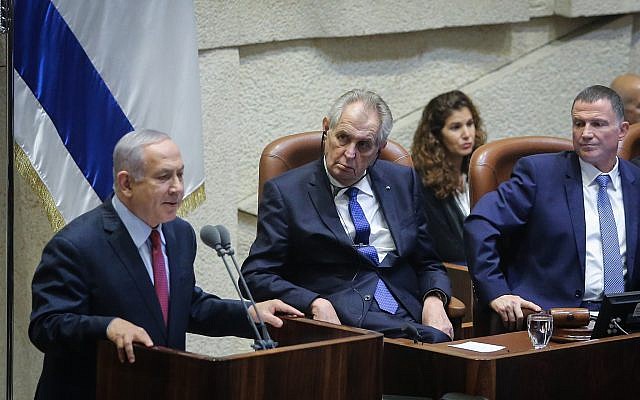 Czech President Milos Zeman Monday pledged to do his utmost to relocate his country’s embassy to Jerusalem despite the Czech cabinet and European Union (UE) positions opposed to Israel’s claims that Jerusalem is its capital.

Speaking to the Israeli Knesset Monday, Zeman vowed to transfer the Czech embassy from Tel Aviv to Jerusalem even though the Czech cabinet, led by Prime Minister Andrej Babis, is staunchly opposed to the move.

“Well, friends, I am no dictator, unfortunately,” Zeman told the Knesset plenum.

The 74-year-old president earlier on unveiled a three-stage process for the embassy relocation.

“Tomorrow I will open the Czech House. Where? In Jerusalem. And it connects CzechInvest, CzechTrade, CzechTourism, Czech Center and so on,” he said.

The first step, back in April, was the appointment of an honorary consul in Jerusalem, Times of Israel reports.

Israel has unilaterally declared the old City as its capital breaching international consensus to tie the fate of the holy city to final status negotiations between Palestinians and Israelis.

Palestinians hope to make of the eastern part of the disputed city the capital of their future state.

Israel’s drive to seek international backing for its controversial move has met global condemnation. Only the US and Guatemala decided to relocate their embassies to the holy city.