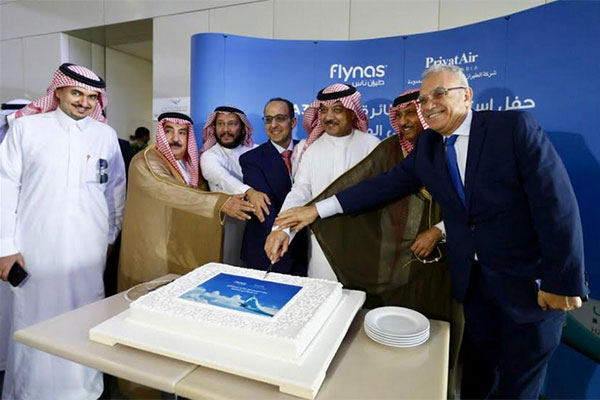 The Saudi low cost carrier, Flynas, has received a first batch of Airbus A320neos, part of the 120 aircraft it ordered from the France-based aircraft manufacturer.

The delivery ceremony was held over the weekend in the Aviation Lounge at King Khalid International Airport, Riyadh, in the presence of Abdul Hakim Al Tamimi, chairman of the Civil Aviation Authority., Ayed Al-Jeaid, chairman of the Board of Directors of flynas, along with a number of executive directors, influencers and media professionals, Trade Arabia reports.

The leading low cost airline in the Middle East agreed with Airbus to purchase last year 120 new A320neos aircraft to revamp and expand its fleet. Eighty of the ordered aircraft will be delivered before 2026. The deal was put at $8.5 billion. The purchase is the second largest in the region.

The plan according to Bander Al-Mohanna, chief executive officer of flynas, is a major strategic step of the airline that would change the air transport map in Saudi Arabia and the Middle East.

Mohanna also indicated that A320neo will make up 50 per cent of the carrier’s fleet in the next coming year. The carrier will introduce new models to be announced later, to contribute to the realization of the Kingdom’s Vision 2030, which aimed at developing the aviation sector.

The 320neo aircraft will enable the carrier to travel long distances and reach new destinations to meet the growing demand.