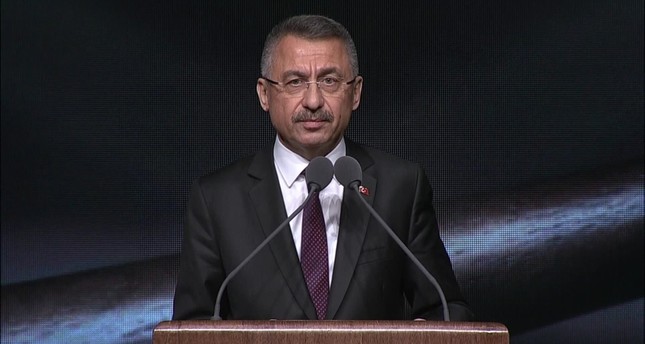 Turkey has walked out of Libyan political talks taking place in Palermo, Italy, over its opposition to the conference approach, which, it believes, crushes the process in line with the interest of countries that destabilized the oil-rich North African country.

Vice President Fuat Oktay Tuesday at a press conference said the Turkish delegation was going back to Ankara with “deep disappointment” after it was barred from attending the conference, gathering Libya’s political protagonists, including East-based powerful Field Marshal Khalifa Haftar and head of UN-backed Presidential Council (PC) Faiez Serraj.

“The informal meeting held this morning with a number of players, presented as the prominent protagonists of the Mediterranean, is a very misleading and damaging approach which we vehemently oppose,” Oktay said.

“Libya cannot be stabilized as long as some countries continue to crush the process in line with their own interests. Libya needs less foreign intervention, not more,” he insisted.

Italy, led by the Populist government of Prime Minister Giuseppe Conte, organized the two-day conference seeking to relaunch fresh talks between Libyan political protagonists with the aim of stemming waves of migrants taking to the sea to join the European country.

The meeting received a blow after Haftar refused to join other key stakeholders at the roundtable talks and preferred to hold one-to-one meetings with leaders of regional countries to discuss national and international developments.

Haftar however held private talks with Serraj in an adjacent room where the military commander said, according an Italian diplomatic source, “he would be happy if Serraj were to stay in power until elections are planned.”

The elections according to the UN Special Envoy to the North African country Ghassan Salame initially scheduled for December this year will rather take place in Spring next year.

The Turkish Vice President Fuat Oktay insisted that Turkey, unlike other countries, is open to a broad dialogue with all Libyan and regional actors, adding that it is impossible for those who are responsible for the current difficult situation in Libya to make any positive contribution to the country’s recovery.

Ankara is accused of supporting Muslim Brotherhoods that Haftar is opposed to ideologically and militarily.