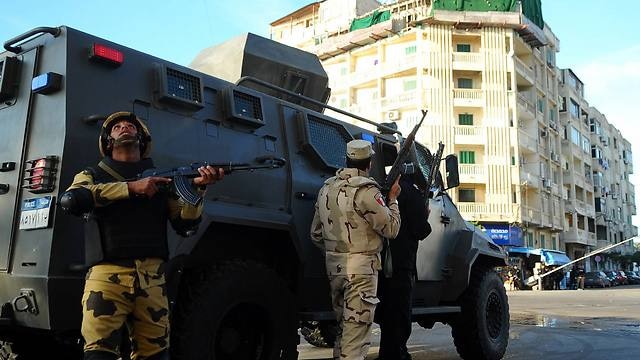 The Egyptian interior ministry Sunday said seven people have been arrested in connection with a foiled terror attack against a Coptic church on Saturday in capital Cairo.

Security forces rounded seven people, including two women. The detainees were plotting a “series of hostilities,” the interior ministry said in statement.

One of the arrested women living in the upscale Cairo neighborhood of Zamalek “played a prominent role … in promoting extremist ideas and providing financial support”, the statement added.

The seven individuals are believed connected to the thwarted bomb attack at a Coptic church in Qalyubiyah, a governorate north of Cairo.

A man wearing a bomb belt blew himself, 250 meters from the church on seeing security forces who were guarding the religious site.

No one was hurt in the blast. The ministry identified the bomber as 29-year-old Omar Mohamed Ahmed Mostafa from Cairo.

The Egyptian Coptic minority, which represents 10 per cent of Egypt’s nearly 100 million population, had been the target of several attacks by the Islamic State group (ISIS), which has been battling with Egyptian security forces, mostly in the Sinai Peninsula.

Two deadly bombings on Palm Sunday in April 2017, another bomb attack on Cairo’s largest Coptic cathedral in December 2016 killed dozens of churchgoers. Eleven other people were killed in December in church shooting.

Islamists target the Copts for their backing to President Fattah Al-Sisi who first came to power in a military coup that unseated Islamist President Mohamed Morsi. The Egyptian President has banned the Muslim Brotherhood movement and imprisoned thousands of its members, including Morsi himself and other bigwigs.