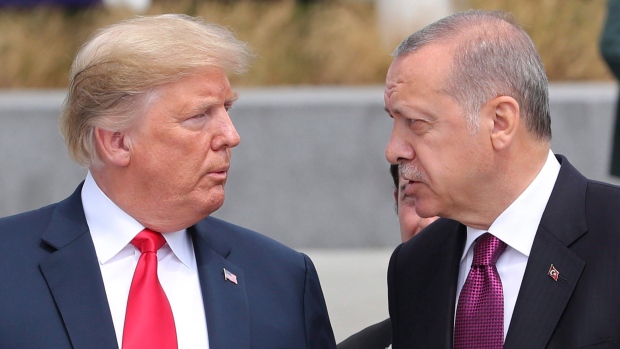 Turkey Wednesday slammed the US sanctions targeting two key ministers of the cabinet and vowed to take equivalent measures in retaliation if necessary.

The U.S. Treasury Wednesday pressed sanctions against Turkish Justice Minister Abdulhamit Gul and Interior Minister Suleyman Soylu over the detainment of U.S. Pastor Andrew Brunson. The two officials, the department said “played leading roles in the organizations responsible for the arrest and detention of the North Carolina Pastor.”

Turkey’s Foreign Ministry in a statement chided the decision and called the U.S. move ‘aggressive attitudes’ that do not serve any purpose. Country’s top diplomat Mevlüt Çavuşoğlu on Twitter pointed out that the U.S. sanctions move would not be left without retaliation.

“We cannot resolve our problems as long as the U.S. does not give up on its unlawful demands,” he added.

Another official from the government told local daily Habertürk that the tension can be defused through dialogue but warned that Ankara was ready to retaliate to the sanctions if needed.

The sanctions, which are being imposed under the Global Magnitsky Act of 2016, allow the U.S. government to “target individuals and companies or entities involved in corruption or human-rights abuses anywhere in the world.” The two ministers will see their assets in the U.S. blocked and are prevented from traveling to the U.S. Americans are also prohibited from dealing with them.

Justice Minister Gul following the sanctions announcement told media that he own no property or bank accounts in the U.S. and therefore is not affected by the penalties.

Pastor Brunson has been placed under house arrest and banned from traveling abroad after he was previously held for over 2 years in prison over accusations of connection with PKK; a militant group opposed to Ankara, and with FETO organization of U.S.-based cleric Fettullah Gulen. Gulen is considered as the chief plotter of the 2016 military coup against President Recep Tayyip Erdogan.

The sanctions are unprecedented as they are directed to a NATO ally. President Donald Trump last week threatened to sanction Turkey if it does not free the Protestant Pastor who is according to the White House unlawfully detained. Erdogan’s government brushed off the threats.

Brunson is expected to appear in court for another hearing in October. He faces 35 years in prison if found guilty.

Tension between Iran and the U.S. spiraled over the past few weeks with President Trump and his Iranian counterpart Hassan Rouhani exchanging bellicose messages.

Trump’s Monday offer to meet with Iranian leaders for talks any time and without preconditions was swiftly brushed aside by Rouhani’s entourage, which believes such a meeting will amount to a surrender after a hostile campaign by the White House.