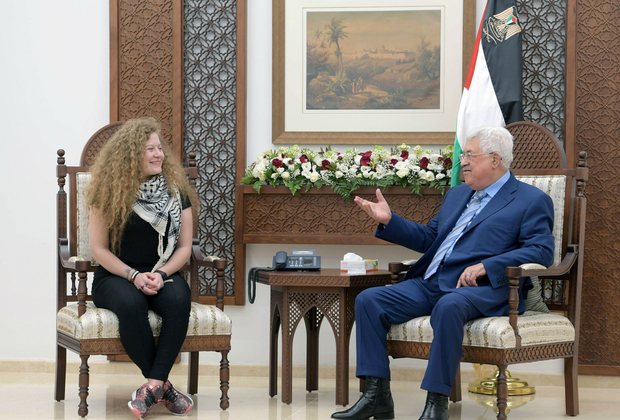 Palestinian teenager Ahed Tamimi Sunday vowed to continue fighting Israel’s occupation of the West Bank after she was released from Israeli jails.

Tamimi, 17, became in December a symbol of the Palestinians’ fight against Israel after a video recorded by her mother showed her kicking and slapping an Israeli soldier after the Israeli army raided her house in the Palestinian village of Nabi Saleh, in the occupied West Bank.

She was arrested and sentenced in March to eight months in prison on assault charges.

Outside the prison, accompanied by her parents, the Palestinian teenage who spent her 17th anniversary in prison said she would continue fighting against the Israeli occupation.

“I will continue my university tuition and I will study law so that I can address the cause of my country in all of the international forums and to be able to represent the prisoners’ cause,” Tamimi said.

“Prison taught me a lot of things, I was able to figure out the right way to deliver the message of my homeland.”

She later met with Palestinian President Mahmoud Abbas in Ramallah. Abbas described her as “a model of peaceful civil resistance …, proving to the world that our Palestinian people will stand firm and constant on their land, no matter what the sacrifice”.