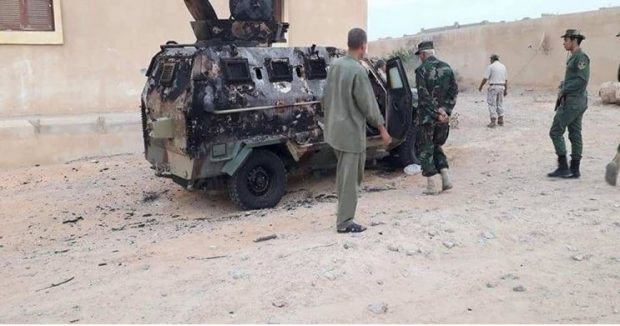 Armed men associated to the Islamic State group (ISIS) murdered two policemen at a checkpoint in the town of Al-Aqilah, in the eastern region, a security official told media Tuesday.

Some armed men that security official Ahmed al-Gabiely believed linked to ISIS stormed the checkpoint manned by Al-Aqilah police and “slit a police officer’s throat” and killed another in a shootout.

The attackers later raided a local police office, set the establishment, police cars and ambulances ablaze. They also hoisted the terror group’s flag atop of the building.

At least four people were unaccounted for following the attack, reports say.

Such attacks, according to Ahmed al-Gabiely became wide currency over the past months, in the same town.

Libyan authorities, based in Tripoli, have managed to expel the group out of the oil-rich country after US airpower helped retake control of Sirte in December 2016.

The terror group, after it lost ground, resorted to guerilla attacks. ISIS entered Libya in 2014 taking advantage of lawlessness that became the order of the day in the wake of Muammar Gaddafi’s death in 2011.