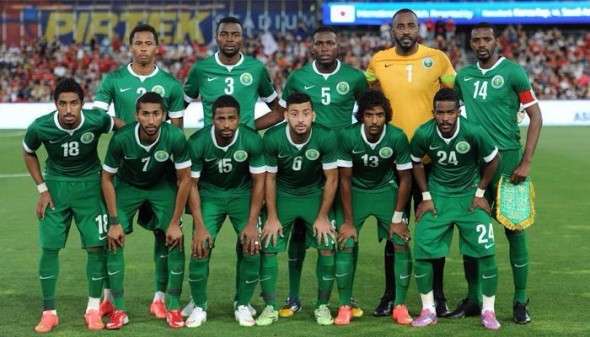 The Saudi national soccer team members have been warned against being ‘complacent’ at next January Asian Cup to take place in the United Arab Emirates (UAE) following their mediocre performance at 2018 World Cup in Russia, despite a win over Egypt in their last match.

The warning, Arab News reports, came from the national team manager Omar Bakhashwain. For Barkhashwain the Green Falcons must not “underestimate their opponents if they are to return to Riyadh with a first continental title since 1996.

Saudi Arabia crashed in their first World Cup match against host Russia 5-0 though the Russian side ranked the lowest team on FIFA’s ranking before the competition kickoff.

The defeat caused laughs in the Arab region and around the world. Authorities took responsibility for the bad performance but indicated that measures will be taken.

The team lost its second match against Uruguay but exited the tournament with a win over Egypt 2-1. The victory was however celebrated as the first victory since the Kingdom’s first participation in a world cup 24 years ago.

The next Asian Cup will take place in neighboring UAE where natural conditions are the same as in the kingdom. The Green Falcons will play their group matches in UAE’s top two cities Dubai and Abu Dhabi; both located less than 1,000 km from the team’s base, Riyadh.

Saudi Arabia are in the same group with Qatar, Lebanon and North Korea in Group E.

The Gulf country’s first and only victory of the competition dates back to 1996 when the UAE last hosted the event.