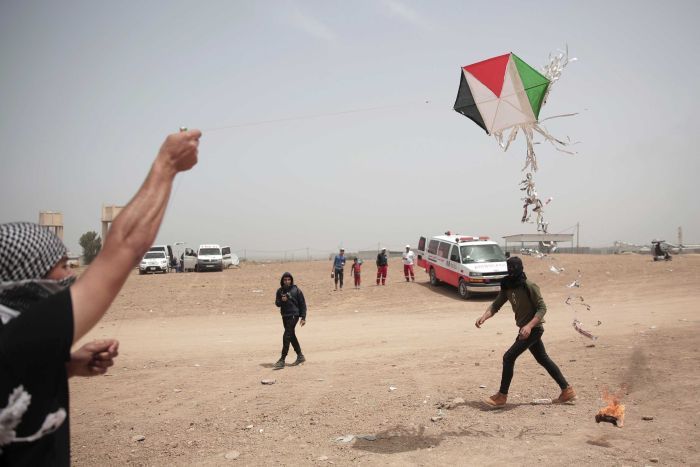 The Hamas organization ruling the Palestinian Gaza Strip is keen to curb the sending of incendiary kites and balloons in Israel, which have caused sizeable damages.

Israel since April has been grappling with new attack strategies from Palestinians in the coastal strip. Dozens of incendiary kites and balloons reportedly fitted with explosives landed in the Jewish state burning lands and farms.

The new form of attack emerged amid the ongoing Palestinian protests, which started in March. The kite attacks surged following the killing of over 62 Palestinian on May 14 by Israeli soldiers as thousands of protesters milled around the fence between Gaza and Israel, in protest of the transfer of the US embassy in Tel Aviv to Jerusalem.

The Palestinian Al-Quds daily, close to Hamas, on Wednesday said the Islamist movement “intends to gradually decrease the launching of incendiary kites from the Gaza Strip into southern Israel.

The information came after Israeli media Ynet News pointed out that Egypt instructed Hamas to put halt to attacks in view of preventing Israel from using them as an excuse to launch a military offensive in the blockaded Strip.

“Egypt has warned Hamas to curtail the launching of incendiary balloons and kites into Israeli territory within a few days,” the news website reported.

“Hamas has told Egyptian intelligence officials… that its men are working to reduce the number of incendiary balloons,” it added.

Pressure has been heaping on Israeli authorities to take tougher actions against kites and balloons fliers.

On Monday, Defense Minister Avigdor Liberman’s office said Israel will further limit the flow of goods into the Gaza Strip in response to the continued airborne kite and balloon attacks emanating from Gaza, Times of Israel reported.

Authorities also imposed restrictions on cargo movements at Kerem Shalom crossing. Fuel supply through the crossing has been halted. They also put a ban on export of Gaza-produced products and on most goods destined to the strip.