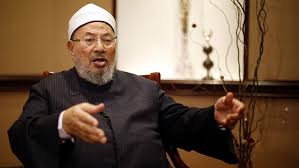 The UN High Commission for Human Rights Tuesday called on Egyptian authorities to release unconditionally the daughter of Egyptian cleric Sheikh Yusuf al-Qaradawi who has been willy-nilly involved in the ongoing diplomatic showdown between Qatar and its neighbors led by Saudi Arabia.

Liz Throssell, spokesperson for the UN High Commissioner for Human Rights in a statement called on Cairo to free Ola Al-Qaradawi and her husband Hosam Khalaf unconditionally, noting that the couple was arbitrary arrested in June 2017 and that their rights have been violated in one of the worst prisons following the repeated renewal of 45-day detention.

“We call on the Government of Egypt to unconditionally release Ola Al-Qaradawi and her husband Hosam Khalaf, who have been arbitrarily detained in the country since they were arrested on 30 June last year,” the statement said.

“Qaradawi’s prolonged solitary confinement could also amount to torture or other cruel, inhuman and degrading treatment.”

The UN Human Rights branch also believes Ola al-Qaradawi, 56, was arrested because of ties with Sheikh Yusuf al-Qaradawi. The Egyptian woman is actually the daughter of Doha-based Egyptian cleric who also has Qatari nationality.

She was arrested less than one month after Saudi Arabia, United Arab Emirates (UAE), Bahrain and Egypt on June 5 severed ties with Qatar over the Gulf country’s alleged funding for terrorism and lending support to the Muslim Brotherhoods. Qatar has denied the charges.

Qaradawi himself in an online statement on Monday slammed Egyptian authorities noting that his daughter was arrested in connection with the ongoing crisis.

“Why has this happened? Because she is my daughter and has Qatari nationality? This must be revenge against me and Qatar by attacking a weak point,” he said.

Qaradawi is viewed as the spiritual guide of the outlawed Muslim Brotherhood; a movement banned in the four countries boycotting Qatar.

As a result of the crisis, Qaradawi has been reportedly kicked out of the Saudi-backed Muslim World League organization. The cleric has also been put on a terror list issued by the Saudi-led group.

He has been also sentenced to life in prison in Egypt for “incitement to murder”, following a January court decision, The New Arab reports.