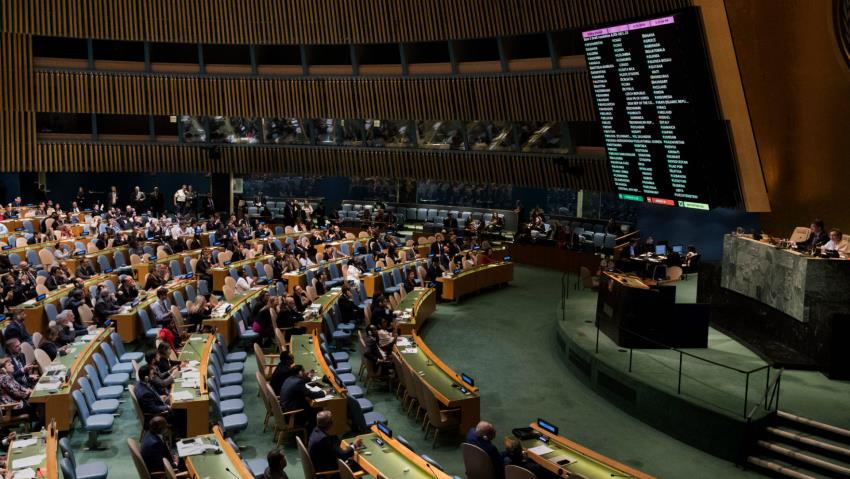 The UN General Assembly condemned Israel’s use of excessive force against Palestinians who have lost over 120 people in recent clashes with Israeli forces near the border of Gaza.

A draft resolution proposed by Algeria, Turkey and Palestinians garnered the support 120 countries. The resolution irked Israel and its ally the United States because it failed to mention Gaza Islamist movement ruler Hamas.

“The nature of this resolution clearly demonstrates that politics is driving the day. It is totally one-sided. It makes not one mention of the Hamas terrorists who routinely initiate the violence in Gaza,” US Ambassador to the United Nations Nikki Haley told the General Assembly before the vote.

Out of the 193 General Assembly countries, 120, led by Arab countries backed the draft resolution. Eight countries voted against it while 45 abstained.

The voting came following a first attempt by Palestinians and their supporters to win a UN Security Council condemnation for the death of over 120 Palestinians killed by Israeli forces in a series of protests near the fence between Gaza and Israel. The United States early this month vetoed the draft.

Palestinians and their backers accused Israel of shooting at unarmed Palestinians. Israel rejected the blame arguing that most of those killed were Hamas activists who wanted to trespass the fence in view of causing mayhem in Israel.

The resolution forwarded a number of proposal measures including “on ways and means for ensuring the safety, protection and well-being of the Palestinian civilian population under Israeli occupation, recommendations regarding an international protection mechanism.” The GA asked the UN Chief Antonio Guterres to report back within 60 days.

“We need protection of our civilian population,” Palestinian UN envoy Riyad Mansour told the GA before the vote.

“We cannot remain silent in the face of the most violent crimes and human rights violations being systematically perpetrated against our people,” he added.

The resolution at the GA is not legally binding.