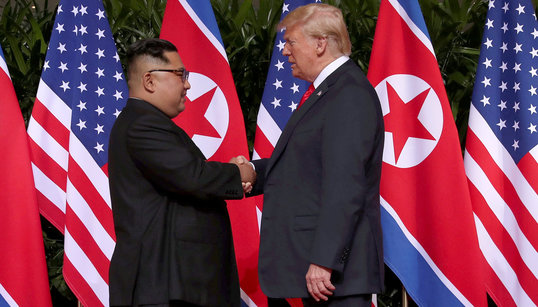 Iran has sent warnings to North Korea not trust US President Donald Trump following the denuclearization agreement signed between North Korea leader Kim Jong Un and the US President during their historic summit in Singapore.

“We don’t know what type of person the North Korean leader is negotiating with. It is not clear that he would not cancel the agreement before returning home,” Iranian government spokesman Mohammad Bagher Nobakht was quoted as saying by IRNA new agency.

Trump had long blasted the Obama-era deal saying that it failed to control Iran’s ‘bad’ influence in the Middle East region.

Other signatories of the deal, namely France, Germany, Russia and China have pledged to protect the deal even if it looks to be a bad deal.

Trump’s withdrawal of the deal means re-imposition of economic sanctions which will crush Iran’s hopes for economic development.

Nobakht predicted that Trump may not be elected for a second term.

“This man does not represent the American people, and they will surely distance themselves from him at the next elections,” he said.

The Tuesday agreement between Trump and Kim will ensure complete denuclearization of the North Korean peninsula while it guarantees security for Kim’s regime.