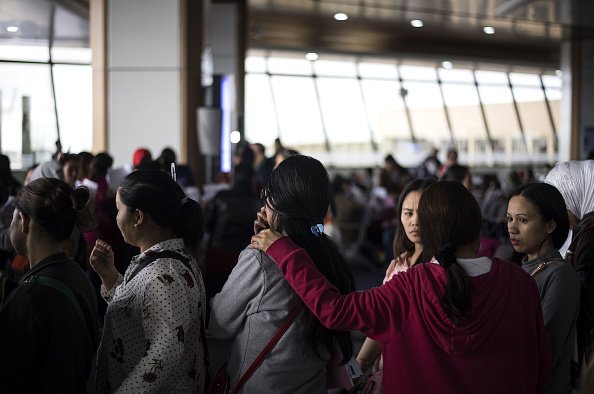 Foreign Minister of Philippines Friday said he would advise the President to lift “immediately” the February ban on the deployment of Filipinos as domestic workers in Kuwait as the two countries inked new regulations to govern these workers’ recruitment.

Alan Peter Cayetano and his Kuwaiti counterpart, Sheikh Sabah al-Khaled al-Sabah, told the media that an agreement between the two countries on the employment of domestic workers was reached.
Kuwait is one of the main recruiters of Filipina domestic workers. They represent around 60 per cent of the 260,000 Filipino work force in the Gulf country.

The two countries fell out at the beginning of this year after Philippines President Rodrigo Duterte accused the Gulf country of abandoning his citizens when they are victim of abuses and inhuman treatment. The Asian leader in February imposed a ban on the deployment of Filipina workers after a 29-year worker was found stuffed in a freezer for over one year.

Manila and Kuwait City initiated talks to come up with a new workers’ deal but the tension between the two countries escalated last month with the expulsion of the Filipino envoy caught in a controversy after video footage showed the Philippines mission staff involved in rescue operations of domestic workers from their work place without the consent of their employers.

Foreign Minister Cayetano at the joint press conference said the crisis is over.

“I think the crisis is over. We will move on with the bilateral relations and we will resume normal ties with Kuwait,” he said.

The top Philippines diplomat also indicated he will advise President Duterte to consider lifting “immediately the ban. A new ambassador will be soon appointed, Cayetano also pointed out.

The new deal seen by AFP grants Philippine workers a number of rights including keeping their passports and cellphones formerly prohibited and seized by their employers. They will also be entitled to food, housing, clothing and health insurance.

The document also stipulates that renewal of contract must be referred to the Philippine Overseas Labor Office, instead of being automatically renewed, the French news agency notes.