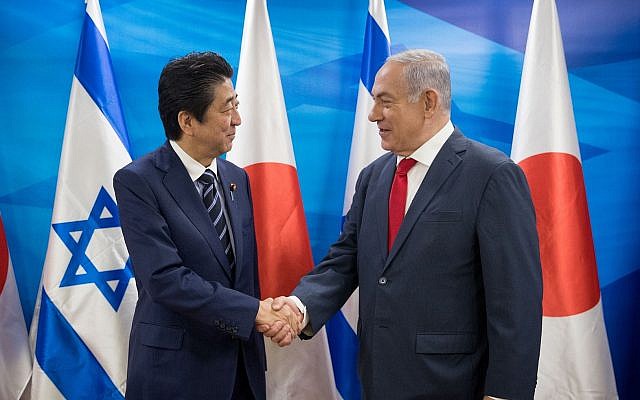 Japanese Prime Minister Shinzo Abe Wednesday told his host Benjamin Netanyahu that his country still believes in the nuclear deal between Iran and world powers despite Israel’s demand to see Japan walking away from it.

Local Israel media Haaretz notes that Abe, during his meeting with Netanyahu, indicated that the deal, rejected by Israel and the US, helped bring stability to the region.

Abe began early this week a tour of the region.

Netanyahu according to his office laid into the agreement signed between the Islamic Republic and world powers as he pointed out that the pact was based on lies and hidden agenda by the Tehran regime.

“Iran kept all the (nuclear) plans. Those who do not want nuclear weapons do not make plans and certainly do not keep them,” Netanyahu is quoted as saying.

Netanyahu tried to convince the Japanese Premier that the Jewish state is in possession of the secret files proving Iran’s non-compliance with the deal, which curbs its nuclear program.

Early this week, Netanyahu on the basis of over 100,000 files, mined by Israel’s foreign secret service, in an expose criticized Iran for lying to the world on its nuclear program for uranium enrichment, which would endow the Islamic Republic with nuclear arsenal.

The presentation failed to win over European allies who still believe that Iran has so far remained faithful to the deal.

Germany, France, and EU, all signatories of the agreement stressed that the deal, even if not perfect, is better than nothing.

In another blow to the Israeli diplomacy, Abe, during his visit to the Palestinian Authority leader Mahmoud Abbas Tuesday, indicated that Tokyo will not relocate its embassy in Jerusalem and will wait until final status issues are resolved.

Israel is looking forward to seeing other countries transferring their missions to the old city that US President Donald Trump in December declared as Israel’s capital, despite UN resolution leaving the fate of the disputed city to final status negotiations between Palestinians and Israelis.

Only few countries, all of them not big weights, have planned to follow the US move. Trump this week told media that he was considering visiting Jerusalem as Washington plans to inaugurate its new mission headquarters on May 14.

The headquarters according to media reports will be named Trump Tower.