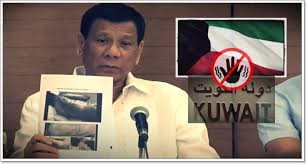 Kuwait has expressed regrets and threatens to expel Philippines’ envoy after the diplomat confirmed to media that the embassy has been helping Filipina house workers flee their employers in the Gulf country.

Already strained ties between Kuwait and Philippines worsened again over the week-end after Kuwaiti authorities accused the ambassador for aiding smuggling out Filipina domestic workers.

Ambassador Renato Villa was summoned Saturday for the second time in two days for making inflammatory comments to Al-Jarida; a local media, and for the inappropriate behavior of diplomatic staff.

Villa reportedly confirmed to the media that a video post on social media purporting “Philippines embassy staff helping Filipino domestic workers to flee their sponsors by picking them up in embassy vehicles outside employers’ homes” was genuine.

The embassy staff picked up some workers without the knowledge of the interior ministry and the workers’ employers.

Lawmakers have reportedly been angered over the alleged incident and called for the expulsion of the ambassador and other embassy staff involved.

Villa told a press conference Saturday that the interior ministry was in the know of the operations.

Two Filipinos allegedly involved in the operations were reportedly arrested and confessed to the accusations, Kuwait Times reports.

The Kuwaiti Foreign ministry has condemned the move by the Philippines mission and Villa’s statement.

Both countries have been since January embroiled in a diplomatic crisis following accusation by Manila that some of its citizens working in Kuwait have suffered abuses. The Asian country in February imposed ban on the employment of Philippines citizens in the Gulf country.

The new incidents came as both countries try to work on fresh terms on the recruitment of Filipino work force.

“We have reached a consensus and signed a preliminary agreement in the hope that it will be signed in Kuwait later but it seems to me that recent developments will not enable the signing of this agreement,” Khalid Al-Jarallah said.