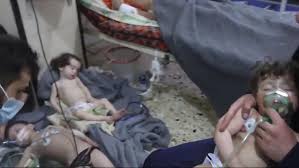 The G7 Leaders have condemned in the strongest possible terms the use of chemical weapons in attacks in Eastern Ghouta, in Syria and voiced support to the airstrikes launched by the United States, the United Kingdom and France in response to the April 7 attack.

In a statement released Tuesday (April 17) by the leaders of the G7, made up of Canada, France, Germany, Italy, Japan, the United Kingdom, the United States of America and the European Union, said they are united in condemning in the strongest possible terms, the use of chemical weapons in the April 7 attack in Eastern Ghouta, Syria.

“We fully support all efforts made by the United States, the United Kingdom and France to degrade the Assad regime’s ability to use chemical weapons and to deter any future use, demonstrated by their action taken on April 13,” the statement said.

The repeated and morally reprehensible use of chemical weapons by the Assad regime in the past has been confirmed by independent international investigators, they recalled, condemning what they called “this deliberate strategy of terrorizing local populations and forcing them into submission”.

Syria’s possession of chemical weapons and their means of delivery are illegal under UN Security Council Resolution 2118 and the Chemical Weapons Convention, the statement noted, adding that the G7 members “stand together against impunity for those who develop or use these weapons, anywhere, anytime, under any circumstances”.

“We remain committed to a diplomatic solution to the conflict in Syria. We commend and support UN Special Envoy de Mistura’s efforts towards an inclusive and credible political transition in accordance with UN Security Council Resolution 2254 and the Geneva Communiqué,” the G7 statement concluded.

The organization for the Prohibition of Chemical Weapons (OPCW) dispatched a team of experts to Syria on Saturday to investigate whether chemical weapons were actually used in the April 7 attack on Douma that killed at least 70 civilians.
But so far, the OPCW experts could not access the site. The USA and other Western countries are accusing Russia and Syria of blocking the chemical inspectors to have time to tamper with evidence on the site of the attack.