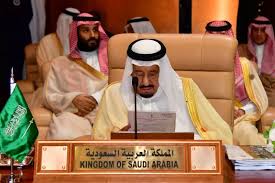 King Salman Ibn Abdelaziz Al-Saud announced at the 29th Arab League summit, convened Sunday in Dhahran, that his country will donate $150 million to the benefit of the Islamic Waqfs (endowments) in Al Quds.

“Saudi Arabia Announces a $150 Million donation to support Al Quds Islamic Waqfs,” Said the Saudi Sovereign at the opening of the Summit dubbed “Al Quds Summit”.
King Salman, who announced another $50 million donation to the United Nations Palestinian Refugee Agency (UNRWA), denounced in his speech the decision of US President Donald Trump to transfer the United States Embassy from Tel Aviv to Jerusalem.

“We reiterate our rejection of the American decision regarding Al Quds,” said the Saudi Sovereign, noting that “Al Quds is an integral part of the Palestinian territories.” He also said that the Palestinian issue will remain the primary cause of Arab countries until the Palestinian people regain all their rights, including the establishment of their independent state with Al Quds Acharif as its capital.

They warned against taking any action that would change the current legal and political status of Al-Quds, while reaffirming their continued efforts to re-launch serious and effective Israeli-Palestinian peace negotiations that will end the political stalemate resulting from the intransigence of Israeli positions.