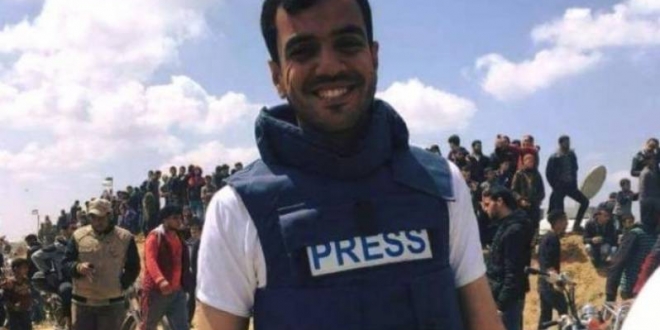 Avigdor Liberman told the media Murtaja, the co-founder of Gaza-based TV production company Ain Media, was on Hamas payroll for several years and held a rank amounting to that of captain.

“This is a member of the military arm of Hamas who holds a rank parallel to that of captain, who was active in Hamas for many years,” Lieberman said.

“Once again we see how Hamas uses the media, ambulances and patients, including cancer patients who are sent to hospitals in Israel,” to carry out “terrorist missions,” the Israeli minister said without backing up his comments with evidence.

Murtaja was shot in the torso during the second Friday of Hamas-backed “March of Return”, a peaceful protest to last until mid-May. The protest marks the 70th anniversary of Israel’s establishment and the eviction of thousands of Palestinians from their lands in the process of the creation of the Jewish country.

The protests took place few meters from the border with Israel, which deployed snipers on the Israeli side.

He was shot although he was wearing a vest emblazoned with the word “press”.

Lieberman over the weekend sought to justify Murtaja’s death arguing that he was operating a drone to gather intelligence on IDF.

“I don’t know who is or isn’t a photographer. Anyone who operates drones above IDF soldiers needs to understand he’s putting himself in danger,” Lieberman said.

Murtaja’s colleagues and lo has been listed to receive US government grant support for private sector. The company ved ones brushed off Lieberman’s comment as “ridiculous”. Rushdi Al-Serraj, co-founder of the Gazan TV production ridiculed Lieberman’s statement calling on the Israeli establishment to confess the killing of his colleague, Times of Israel reports

Ain Media was nominated last month to pocket $11,700 from the USAID. The company qualified for the grant following strict screening requirements of USAID-funded assistance, the Israeli media reports.

Early this week, Lieberman also noted that all Gazans are subject to Israel killings arguing that all of them are Hamas operatives.