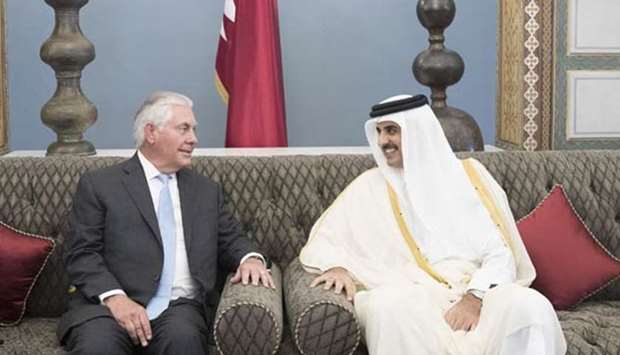 A BBC report based on obtained leaked e-mails revealed that United Arab Emirates (UAE) army Chief, Mohammed bin Zayed, who is also Abu Dhabi Crown Prince, attempted to secure the sacking of US Secretary of State Rex Tillerson for failing to back the UAE in the diplomatic showdown with Qatar in the eight-month old Gulf crisis.

The leaked e-mails are from Elliott Broidy; a fundraiser of the US President and owner of Circinus, a private company, which has a millions of dollar contract in the UAE.

The obtained e-mails are an account discussions between Broidy and President Donald Trump during a meeting in October; five months into the Gulf crisis, which has been opposing Saudi Arabia, the UAE, Bahrain and Egypt to Qatar on the other.

Saudi Arabia and its allies in June severed ties and imposed a blockade on Qatar, another US Gulf ally, over alleged support for terrorism charges.

The diplomatic crisis tilted the White House and State Department on opposite sides with President Trump openly backing the blockade while Tillerson observed more caution in his attempt to mediate the quarrel.

The US top diplomat however chided the blockade arguing that it was hindering international business in the region.

Broidy assaulted, in one of the e-mails, Doha-based news network, al Jazeera, that he claimed ‘did nothing positive’.

The Saudi-led quartet lobbied for the closure of the network over what the four called bias reporting of the Yemen conflict where anti-Qatar countries have been involved.

The leaked e-mails also revealed the involvement of George Nader, a Lebanese-American businessman who operates as an adviser to Mohammed bin Zayed.

Both Broidy and Nader have been named in US investigations into whether Trump illegally collaborated with foreign countries during the presidential campaign. The UAE are suspected for donating millions of dollar to Trump campaign.

Broidy and his company have rejected the BBC report noting that Qatar hacked his e-mails and altered the content.

“We have reason to believe this hack was sponsored and carried out by registered and unregistered agents of Qatar seeking to punish Mr Broidy for his strong opposition to state-sponsored terrorism,” the company’s spokesperson said in a statement.

The UAE ruler masterminded the failed coup with several other key figures from Egypt, Saudi Arabia and Bahrain in conjunction with several Qatari citizens, al Jazeera noted basing its affirmations on testimonies by participants in the coup.