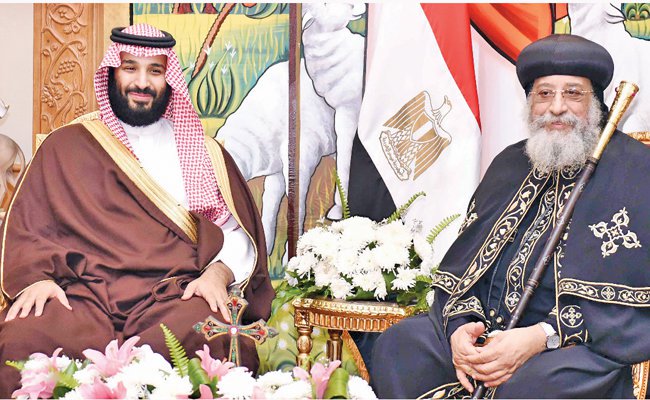 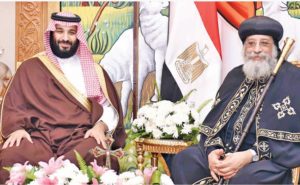 The young royal and heir to the throne met with Pope Tawadros in St Mark’s Cathedral late Monday.

The visit to the Christian religious place by a Saudi top official is the first ever in history.

Mohamed bin Salman kicked off Sunday a three-day visit to Egypt, first leg of his first international tour since becoming Crown Prince in June last year. The young heir is leading seismic reforms seeking to polish the largest Sunni country’s image of exporter of radical Islam and a country opposed to women empowerment.

The Crown Prince invited the Pope and all Coptic Christians to visit the Sunni kingdom, reports say.

Several decrees in favor of women have been issued and a significant number of clerics, deemed radical, have been banned or arrested.

Egypt has been facing a surge in radicalism and terrorism. Coptic Christians have become targets of terror attacks in urban places and in the restive Sinai Peninsula. An Islamic State group bombing attack near St Mark’s cathedral killed at least 25 people, in December in capital Cairo.