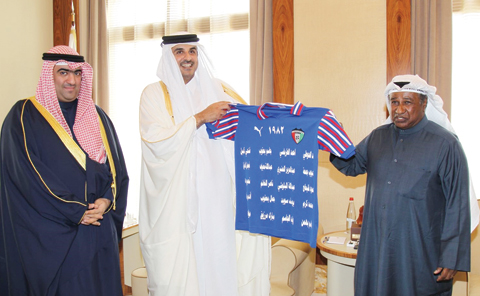 Kuwait has slammed a Saudi top official’s tilt at the Kuwaiti sports minister over his recent visit to Qatar, a country facing a regional isolation from Saudi Arabia, United Arab Emirates (UAE), Bahrain and Egypt.

Kuwaiti deputy foreign minister Khaled al-Jarallah at an event at the Indian mission in Kuwait City told reporters that he had conveyed ‘regrets and admonishment’ to the Saudi envoy to Kuwait to protest the comments made by head of Saudi Sports Committee, Turki Al al-Sheikh.

Turki Al al-Sheikh had called the Kuwaiti Sports Minister Khalid al-Rodhan a “mercenary’ in a tweet over his visit to Qatar last week.

“We assert our rejection and astonishment at this insult because of its impact on the warm and distinguished fraternal relations between the two sisterly countries,” Jarallah was quoted as saying by official news agency KUNA on Wednesday.

The visit was captured and reported in media of both countries.

“This mercenary (Rodhan) will not harm Saudi Arabia’s historic relations with its sister Kuwait, and he only represents himself in what he said,” the Saudi official wrote on Twitter, describing Rodhan as a mercenary.

Kuwait hosted from December 22 to January 5, the regional soccer tournament after the world football governing body FIFA removed its ban. Qatar accepted to hand over the organization to Kuwait.

Saudi Arabia, the UAE and Bahrain initially refused to attend the tournament should it be taking place in Qatar. The three in addition to Egypt have severed ties with Doha over claims that the tiny Gulf country supports terrorism.