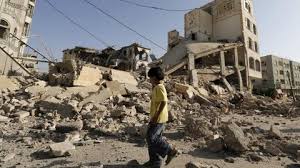 An airstrike by the Saudi-led coalition killed 68 Yemenis in Taiz bringing the death toll to 109 in past 10 days alone leading the UN to strongly denounce the heavy civilian casualties.

The increasing civilian Yemeni victims of the indiscriminate shelling by Saudi and allied fighter jets was described by the UN as “absurd and futile war”.

Eight children were among the 54 people killed in the morning strike on the al-Hayma market, in the Taiz governorate, it said. Hours later, an airstrike on the port city of Hodeida killed 14 people, all members of the same family.

The UN accused the coalition of showing “complete disregard for human life” in an unusually direct criticism of the war in which the Saudi-led coalition, backed by the United States, Britain and others, is fighting Iran-allied Houthi rebels.

Jamie McGoldrick, the UN’s humanitarian coordinator for Yemen, said he was “deeply disturbed” by the “escalated and indiscriminate” attacks being carried out by the Saudi-led coalition, which includes the United Arab Emirates and other countries.

He said: “These incidents prove the complete disregard for human life that all parties, including the Saudi-led coalition, continue to show in this absurd war that has only resulted in the destruction of the country and the incommensurate suffering of its people, who are being punished as part of a futile military campaign by both sides.

The fighting and a blockade by the coalition has also left 20.7 million people in need of humanitarian aid, created the world’s largest food security emergency, and led to a cholera outbreak that is thought to have killed 2,227 people since April.