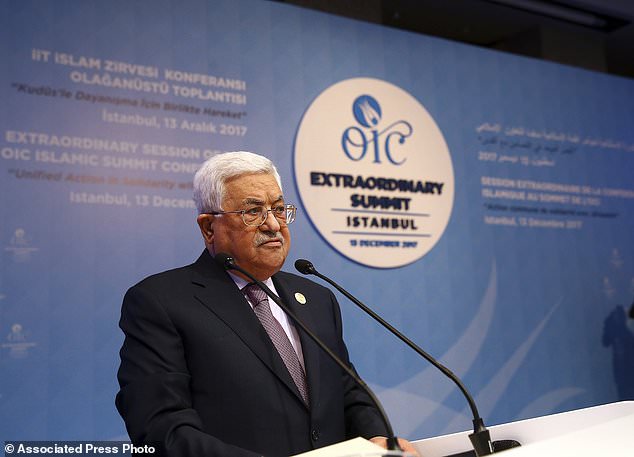 The OIC meeting, dubbed “Freedom for Jerusalem” and held under the chairmanship of President Recep Tayyip Erdogan, issued a strong worded communiqué calling on the world to recognize the Palestinian state and Eastern Jerusalem as its capital.

The OIC meeting was held one week after President Trump, despite global warning, officially declared Jerusalem capital of Israel and announced his plans to move the US embassy to the city.

The decision caused global outcry and sparked demonstrations across the Middle East region.

The status of the city has been left to be determined by Israelis and Palestinians through the final status negotiations.

The communiqué slammed Trump’s decision that OIC deems “null and void legally” and “an attack on the historical, legal, natural and national rights of the Palestinian people, a deliberate undermining of all peace efforts, an impetus to extremism and terrorism, and a threat to international peace and security”.

President Erdogan pledged the OIC’s support to the Palestinians people adding that the US proved that it could not be neutral peace broker as it is biased.

“From now on, it is out of the question for a biased United States to be a mediator between Israel and Palestine, that period is over.”

Palestinian leader Mahmoud Abbas also sidelined the US in the future peace talks adding that Trump’s decision was the “greatest crime” and a “violation of the international law”.

“The US can no longer mediate between Palestine and Israel. That process is over. The process can only continue with a neutral side, not a biased one.”

King of Jordan Abdullah, Iranian President Hassan Rouhani and several other Muslim leaders attended the summit. Saudi Arabia and its allies only sent low-key officials, suggesting a more cautious stance of the issue.

The US, following the summit, adopted a less radical position noting that President Trump’s recognition of Jerusalem as Israel’s capital does affect the city’s final borders, which were dependent upon negotiation between Israelis and Palestinians.

“I think it’s up to the Israelis and Palestinians to decide how they want to view the borders – again final status negotiations,”State Department spokeswoman Heather Nauert said.