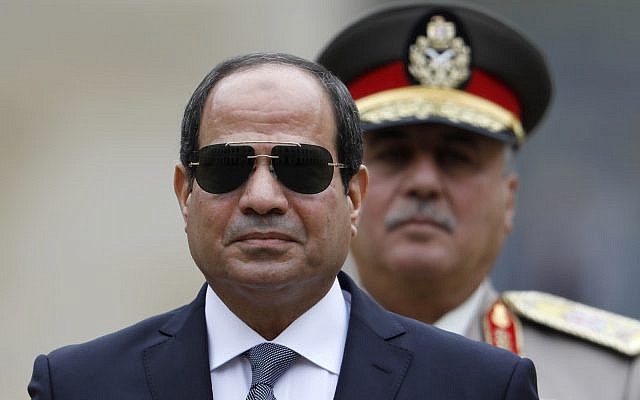 President Abdel Fattah al-Sisi Wednesday allowed the army to use ‘brute force’ to squash militancy in the Sinai following the killing of 305 people in the restive province last Friday in an attack authorities blame on the Islamic State group (IS).

“Allow me to take this opportunity to commit General Mohamed Farid Hegazy, in front of you and all the Egyptian people: you are responsible for restoring security and stability in Sinai within three months, you and the interior ministry,” al-Sisi told the chief of staff in a televised speech marking the birth of Prophet Sidna Mohamed.

“In three months, with God’s grace, and with your help and sacrifices and those of the police, Egypt will restore stability and security in Sinai,” al-Sisi told his new Chief of staff Maj. Gen. Mohammed Farid Hegazy.

Egypt witnessed last Friday its deadliest terror attack in modern history as jihadists, carrying the banner of the terror group, attacked worshippers in a mosque during the midday Friday prayer in the Sinai killing over 300, including 27 children.

The jihadists attacked the mosque because it is linked to Sufi order considered heretic by the Sunni group.

It was the second time since the attack that al-Sisi mentioned the use of brutal force.

The mandate given to armed forces is unclear but observers believe that allows the military to commit human rights abuses and atrocities already blamed on the Egyptian forces.

The army general turned-President has made the fight against terrorism his major concern, a move that won him the praise and support from Western powers with the Trump administration being the staunch supporter.

Jihadists have stepped up attacks against the armed forces in the Sinai since 2013 following the overthrow of elected President Mohamed Morsi by al-Sisi who was then Defense minister.

The attacks have also targeted Christian communities and spilled to mainland including Cairo and other major cities.