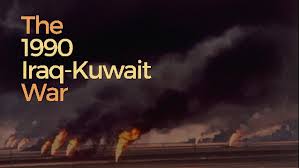 Iraq announced that it will resume reimbursements to Kuwait to fully pay the remaining $4.6 billion for the destruction it has caused during the 1990-1991 invasion.

The U.N. Compensation Commission (UNCC) said Iraq will restart payments to Kuwait for the destruction of its oil fields and facilities during the Gulf war.

The payments will begin with 0.5 percent of Iraq’s oil proceeds in 2018 and escalate annually until the end of 2021, The UNCC said.

“Based on oil price and export projections, this would result in payment in full of the outstanding claim award,” the Commission added.

The payments were suspended since October 2014 due to security and budgetary challenges faced by Iraq in its fight against the Islamic State group.

The UNCC was established in 1991 as a subsidiary organ of the UN Security Council to “process claims and pay compensation for losses and damages suffered as a direct result of Iraq’s unlawful invasion and occupation of Kuwait in 1990-91.”

In 2005, the Commission finished processing 2.7 million claims amounting to $352.5 billion. It awarded compensation amounting to $52.4 billion to 1.5 million successful claimants.