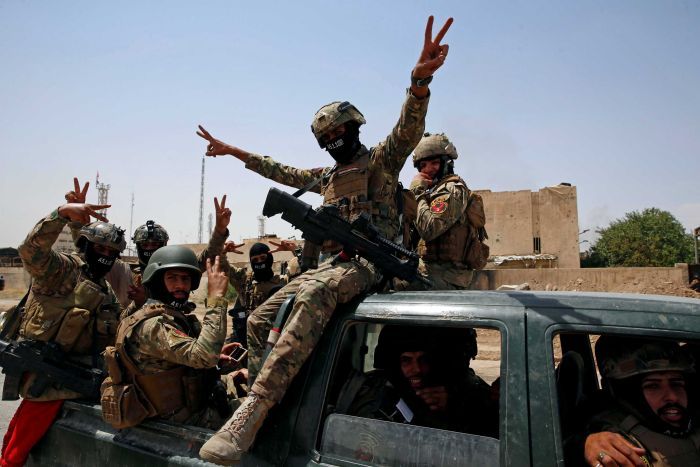 Iraqi forces have recaptured the border town of Rawa from the Islamic State leaving the terrorist group on the verge of total defeat with no territory left in Iraq.

Iraqi army and paramilitary forces “liberated Rawa entirely, and raised the Iraqi flag over its buildings,” Lieutenant General Abdul Ameer Rasheed Yarallah said in a statement from the Joint Operations Command on Friday.

After the larger town of Al-Qaim fell to Iraqi forces, IS forces fled to small pockets under their control in the country.

Prime Minister Haider al-Abadi said in a statement Rawa was taken in “mere hours”. “Our heroic forces have liberated Rawa district in a record time and will continue purging and securing the border areas,” he said.

Rawa was one of a number of towns on both sides of the Iraqi-Syrian border, designated by IS as part of its “Euphrates Province”, which it had used to transfer fighters, weapons and goods between the two countries.

IS has now been driven out of about 95% of the land the group once held in Iraq and more than 4.4 million Iraqis are no longer under its rule, according to the US-led coalition.

Over the border in Syria, IS still holds around 25 percent of the countryside of Deir Ezzor province but is under attack not only by government forces but also by US-backed Kurdish-led fighters.

In the border town of Albu Kamal, the Syrian army was battling IS fighters who mounted a surprise counterattack last week, pushing out government forces who had retaken it last month.