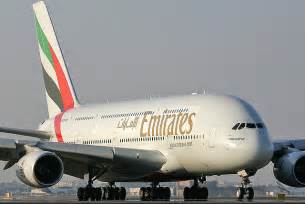 The Dubai-based airline Emirates announced Sunday it will reinstate its air links with the Nigerian capital Abuja after the suspension decided in October 2016 over currency crisis in the West African country.

Four weekly flights will be operational as of December 15 from Dubai to Abuja and from Abuja to Dubai.
A 360-seat Boeing 777-300 in a three-class configuration will be used for the in and out trips known respectively as flight EK785 and flight EK786.

The flight EK785 will leave Dubai every Monday, Wednesday, Friday, and Saturday and the return flights will depart from Abuja the following days.

Emirates launched the Dubai-Abuja route in August 2014 but put halt to the connection over the fall of the Nigerian Naira.

Alongside with resuming connection with Abuja, the airline also announced launch of additional flights to its Dubai-Lagos route already busy with six weekly flights.

The company said it will provide up to 23 tons of cargo capacity per flight to “enable increased imports of electronic goods, construction equipment and pharmaceuticals, and exports of fresh produce and perishables.”

The Dubai-Lagos route was launched in January 2004 with four weekly flights via Accra-Ghana. The number of flights was increased to six plus the abandonment of the Accra link following increased demands in 2005.