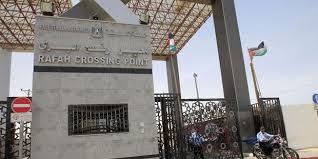 In implementation of the landmark Palestinian reconciliation accord, Hamas handed over control of the Gaza strip borders with Egypt and Israel to the Palestinian Authority.

The move is part of restoring the status quo ante the 2007 split that mired the Gaza strip, ending with Hamas taking over the area after an attempted coup by Fatah strongman Mohammad Dahlan.

Nazmi Muhanna, the Palestinian Authority’s top official for border crossings, affirmed that he has formally received control of the Rafah crossing with Egypt from his Hamas counterpart in a ceremony.

At the Rafah crossing, Palestinian and Egyptian flags were flying, with large pictures of Palestinian Authority president Mahmoud Abbas and Egyptian leader Abdul Fattah Al Sisi, after Hamas handed over the border checkpoints, which it had controlled for ten years.

In a statement on Tuesday, the PA minister of civil affairs, Hussein al-Sheikh, said the national unity government is prepared to work closely with Egyptian authorities to prepare the Rafah border crossing for operation by November 15, as specified by the 2005 Agreement on Movement and Access.

Under the Egyptian-brokered deal, the Palestinian Authority is due to take full control of Gaza by December 1.

Israel has maintained a crippling blockade on Gaza for a decade and launched three brutal assaults on the enclave since 2008.

The Gaza Strip’s two million residents suffer from worsening humanitarian conditions, with only a few hours of power a day and a lack of clean water.