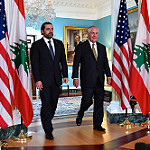 The United States announced Tuesday it is providing more than $140 million in additional humanitarian assistance to Lebanon to help the Middle Eastern country address the urgent needs of refugees from Syria and those of Lebanese host communities.

This announcement was made by the State Department during the Lebanese Prime Minister Saad Hariri’s visit to Washington, DC.

Lebanon hosts more than 1.5 one million registered refugees, representing nearly a quarter of its population, a sign of the great hospitality and generosity of the Lebanese people, the State Department said, calling on other donors to join Washington in providing additional humanitarian assistance for those affected by the crisis in Syria, and also to “fulfill not yet funded previously made pledges”.

The newly announced funding brings U.S. humanitarian assistance to Lebanon to more than $1.5 billion since the start of the Syria crisis in 2012.
The State Department which described the magnitude of suffering and urgent humanitarian need in Lebanon as “unprecedented” said the U.S. funding will serve to provide food assistance, shelter for the most vulnerable families, emergency and hospital care, humanitarian protection, and child immunization and nutrition to the more than one million refugees and Lebanese host populations that are in need.

The United States will also support infrastructure projects that improve access for Lebanese and refugees to safe drinking water and wastewater services.

This assistance supports the critical humanitarian needs addressed in the 2017 Lebanon Crisis Response Plan’s appeal of $2.8 billion. The new funding supports the operations of UN humanitarian agencies in Lebanon.

On Tuesday, the Lebanese Prime Minister met with President Donald Trump and held on Wednesday a meeting with Secretary of state Rex W. Tillerson.

President Trump said after the meeting that the United States would continue to support the Lebanese army in its fight to stop Islamic State and other militant groups gaining a foothold inside the country.