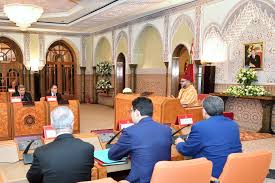 King Mohammed VI of Morocco has lambasted El Othmani’s cabinet for negligence and delay in the completion of several development and social projects in Al Hoceima, planned under the program dubbed “Al-Hoceima, Manarat Al Moutawassit” or “Al Hoceima, Lighthouse of the Mediterranean”.

A statement issued by the Royal Palace following a Ministers’ Council held Sunday, pointed out that the Monarch expressed his “disappointment, discontent and concern,” over the slow pace in the carrying out of the development projects designed for the region since 2015.
The Rif region, situated in Northern Morocco, has witnessed a series of protest movement since October 2016, after Mouhcine Fikri, a fishmonger, was crush to death in a garbage compactor in Al Hoceima, as he tried to retrieve fish that the police had confiscated and thrown away.

Initially staged to claim justice for Mouhcine Fikri, protests have been building up and becoming increasingly focused on addressing the various economic, social, and administrative challenges the Rif region faces.

According to the Royal Palace statement, the King has also cancelled annual vacation of ministers involved in the program so that they monitor the development projects’ progress and ordered relevant departments within the Ministries of the Interior and Finance to conduct a probe to determine those responsible for stalling some projects.

The statement went on to say that King Mohammed VI warned political parties against using the social and development projects for political ends.