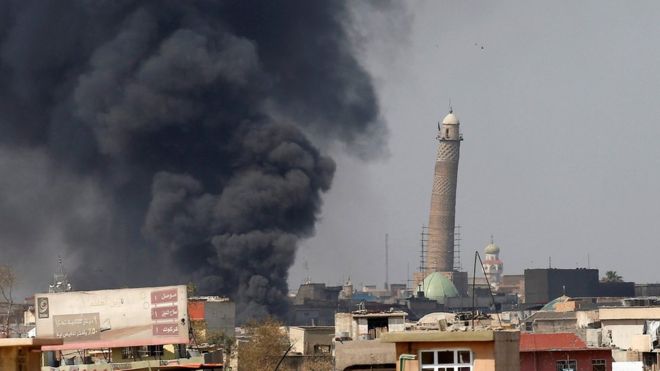 Iraqi Prime Minister Haider al-Abadi said the explosion that brought down the famous leaning minaret at Mosul’s mosque where al-Baghdadi announced the establishment of the Islamic Caliphate in June 2014 marks the official victory over the extremist group.

“Daesh’s bombing of al-Hadba minaret and al-Nuri Mosque is a formal declaration of their defeat,” he stated while lamenting that the act is also “another historical crime” because the monuments are historic places.

ISIS rejected claims that it planted explosives to destroy the minaret and the mosque. A statement on its Amaq news service website claimed that the airstrikes of the US-led coalition led to their destruction. The mosque has stood for more than 840 years.

Major General Joseph Martin, commanding general of the US-led coalition, refuted the allegations. According to him, “ISIS destroyed one of Mosul’s and Iraq’s great treasures” as the Iraqi ground forces closed in on them. He said the destruction of the minaret and the mosque is “a crime against the people of Mosul and all of Iraq” and justifies why “this brutal organization must be annihilated.” The minaret’s collapse came, as the Iraqi forces were 50 meters away from the mosque.

There are still ISIS fighters in the city and they are expected to pose some resistance. The city has been under the control of the extremist group for almost three years. It has built a network of tunnels to launch surprise attacks and ease its movement within the city.

Iraqi military leaders had privately said they wanted to liberate the mosque in time for Eid al-Fitr, a festival marking the end of the Muslim holy month of Ramadan. With two or three days left before the end of Ramadan, the battle around the mosque could get tense and prayers within the premises could be very restricted.