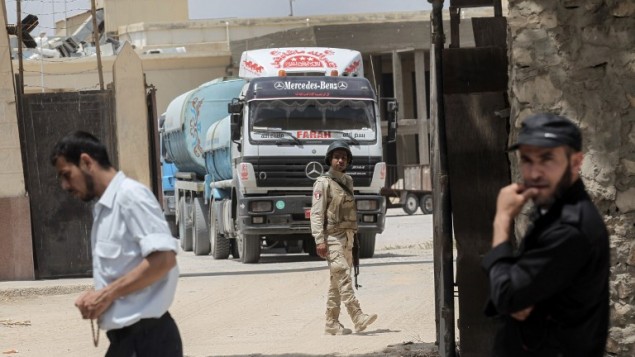 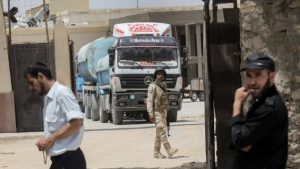 Egypt Wednesday sent a first convoy of trucks loaded with 1 million liters of diesel fuel to power the Gaza electricity plant, out of operations for several months due to shortage of fuel, especially after Israel reduced power supply to Gaza, at the request of Palestinian President Mahmoud Abbas, a staunch foe of Gaza ruler, Hamas.

A total of 11 trucks entered Gaza through Rafah crossing between Egypt and the Hamas-controlled Gaza, Yousef al-Kayali, a Hamas finance official told the Associated Press. The Hamas official said additional one million liters will be delivered on Thursday.

Egyptian official Wael Abu Omar who heads media at the Rafah crossing told AFP that “eight shipments had entered, with a further 14 expected later in the day”.

The move came as Cairo thaws ties with Hamas following stressed relations after Egypt accused Hamas of cooperating with terrorists in the Sinai and smuggling weapons in the enclave territory.

Cairo, prior to the delivery, handed a top Hamas official delegation, which was visiting Egypt, a list of demands including handover of 17 men sought by Cairo on terrorist related charges.

The delivery is supposed to ease crippling power shortage, which has gripped the Gaza Strip for months, coupled with Israel’s cut in its power supply. Israel reportedly reduced its supply from 120 megawatts to 24 over the past three days.

The 1 million liters could only run for few days the plant whose output accounts for only 22 per cent of Gaza’s daily energy needs, assessed at 400 megawatts.

The plant stopped working several months ago after Hamas ceased buying fuel from Ramallah; the seat of the Palestinian authority arguing that it was too expensive.

President Abbas in a series of moves to pressure the Islamist movement to relinquish power in the Strip hiked up the fuel price, slashed salaries of thousands of former staff in Gaza to further hurt the faltering economy.

In April, he had announced his authority would begin to pay only $7 million instead of the $11 million it has been paying monthly for power to Gaza, Time of Israel reported.

The UN and some Israel NGOs have complained about power cuts and have indicated the measures could lead to a “total collapse” of Gaza’s infrastructure, Israeli media reports.

Hamas and Egyptian technical teams are expected to meet after Muslim holiday next week to discuss further the crisis.