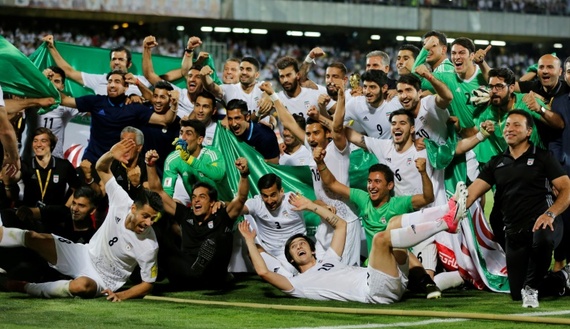 Iran Monday became the third nation to book its spot in 2018 Soccer World Cup to take place in Russia after they beat Uzbekistan in Asian qualifiers.

Iran joins host Russia and five-time champions Brazil after securing a 2-0 win over Uzbekistan Monday at the Azadi Stadium in Tehran.

Iran won six matches out of eight played in group A also including South Korea familiar with the competition.

The Iranian team now tops the group with 20 points, leaving South Korea 7 clear points behind. The Korean team is to play Qatar this Tuesday.

The Iranians are unbeaten so far on the road to Russia. This qualification is the fifth after the Islamic Republic appeared in 1978, 1998, 2006 and 2014 competitions.

Fans and the entire nation challenged the Islamic State group (IS) threats to celebrate the qualification. IS Monday called its militants to stage attacks during the holy month of Ramadan in several countries, including Iran.

President Hassan Rouhani hailed the qualification and thanked the players via twitter.

“Congratulations to the nation and our national team for qualification for the 2018 FIFA World Cup in Russia. You made all of us proud,” he twitted.