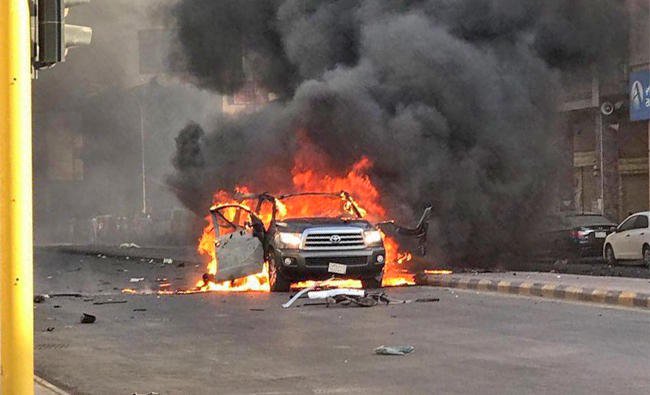 A car blew off Thursday in Shiite-dominated city of Qatif, killing two people identified as wanted terrorists by Saudi authorities.

“Two wanted terrorists were killed in the explosion,” Faisal bin Farhan, an adviser to the Foreign Ministry, said on his personal Twitter account.

One of the wanted terrorists was found charred in the car and the second, also completely charred, lying beside the car reported to be an SUV.

The two alleged terrorists have been identified as Fadhel Al-Hamada and Mohammed Al-Somayel.

The incident took place in a populated area of the city, which is largely dominated by Shiites, a minority in the Saudi kingdom.

Police have not established yet the ins and outs of the incident but Shiites are often targets of attacks by Sunni-dominated Islamic State group (IS) which views the Shiites as apostates.

More than 40 Shiites have been killed since 2014 in attacks in Saudi Arabia’s eastern provinces, including Qatif.

In October 2015, a gunman killed five people at a Shiite meeting hall in Saihat district of Qatif.

The Shiites have been complaining of marginalization and have been mounting demonstrations against the Sunni throne. Demonstrations, which started in 2011 as part of Arab Spring, have been cracked-down severely.

A soldier was killed late last month after their patrol vehicle was hit by a rocket propelled grenade in Awwamiya, in Qatif. Authorities said the incident was the work of terrorists who oppose development projects in the old section of Awwamiya.

Also last month, a Saudi child and a Pakistani worker were killed in Awwamiya.