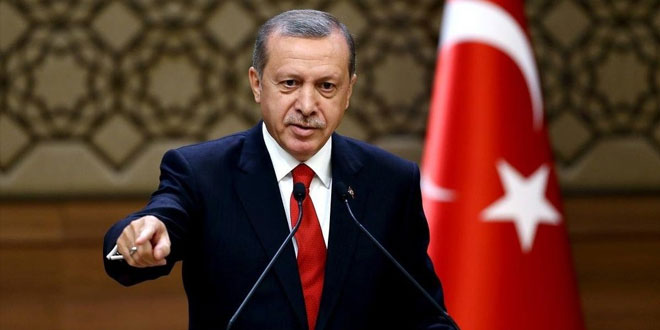 The entire Turkish leadership establishment has rebuked US decision to supply arms to Kurdish Peoples’ Protection Units (YPG) fighting Daech in Syria with help of US air power.

Ankara considers the Syrian group as an extension of the Kurdistan Workers Party (PKK) waging insurgency in Southeast Turkey and blacklisted as terror group by Ankara, Washington and Europe.

“I hope very much that this mistake will be reversed immediately,” the Turkish President Recep Tayyip Erdogan said on Wednesday.

Erdogan’s charge on the US follows this week approval by President Trump to provide the Syrian militia group with additional arms as the group pushes edges on Deach in a move to take the terrorist group’s stronghold of Raqqa.

The Turkish leader vowed to table the issue during next week visit to Washington. Erdogan is expected to meet President Trump on May 16.

Washington has been backing the Syrian Kurd group and other Arab rebels to crash Deach in war-ravaged Syria.

“The supply of arms to the YPG is unacceptable,” he said.

The US decision has been however welcomed on the Syrian Kurdish side. Redur Xelil, a spokesperson for the group noted that arm supply decision will enable the Kurdish forces quickly stamp out the terrorist group.

“From now on, after this historic arming decision, our units will play a more influential, powerful, and decisive role in fighting terrorism at a faster pace,” he said.