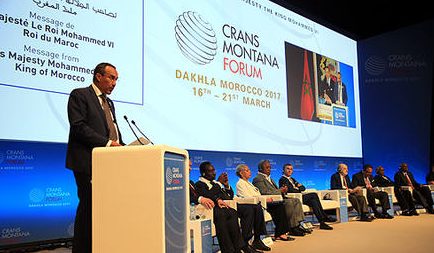 Dakhla, the pearl of the southern provinces, is hosting the annual Crans Montana forum, which brings together leading figures in the fields of economy and politics.

The event opened with a Royal Speech highlighting Morocco’s steadfast commitment in support of Africa’s development.

“Morocco believes in Africa’s capacity to rise to the challenges facing it and to ensure sustainable human development for its peoples, thanks to its vast natural and human resources,” said King Mohammed VI in a message read out by president of the Dakhla oued Eddahab region.

The King commended the topics of the current edition of the Crans Montana forum which centers on characteristics and features of “A New Africa for the 21st Century,” saying that unlocking Africa’s potential hinges on “how much belief we have in ourselves, how far we rely on our own capacities and potential, and how well we exploit them, within the framework of mutually-beneficial South-South cooperation and solidarity-based, strategic partnerships.”

The Monarch added that Africa is buoyed by a new generation of pragmatic leaders working with a high sense of patriotism and responsibility to achieve their countries’ stability, political openness, economic development and social progress.

“South-South cooperation, which is based on the culture of sharing and solidarity, is the mechanism that will enable our countries to exchange their expertise directly and immediately. It will help improve our field experience, make the most of our complementarities and expand our national markets. It will also open up new opportunities for efficient and beneficial investment and achieve effective sustainable human development, while respecting each country’s national sovereignty, as well as the principles of mutual esteem and equality,” underscored the Monarch.

The King expressed Morocco’s willingness to share its expertise in economy, agriculture, industry, energy, banking, insurance, transport and logistics as well as in the social and cultural, security and religious domains with fellow African countries.
He also highlighted the Kingdom’s contribution in the field of security and stability and its contribution to UN peace-keeping operations and mediation aiming at peacefully settling conflicts in the continent.

In his address, the King placed special attention on the need to take joint climate action in Africa. In this respect, he recalled the convening of the Africa Action Summit, which was launched on the side-lines of the UN climate summit in November in Marrakech with a view to addressing the climate challenges Africa is facing.

The King also stressed the need for more cooperation to help African countries secure their energy transition and underscored Morocco’s leadership in the field of renewable energies.

On Morocco’s bid to join the West African Economic Community, ECOWAS, the Monarch highlighted the time-honored human, civilizational and spiritual bonds, as well as special relations based on fruitful cooperation and active solidarity shared between Morocco and West Africa, noting that the Kingdom joined word to action through the launch of the gas pipeline between Nigeria and Morocco, which stands as  “an example of regional cooperation that will benefit eleven African countries.”