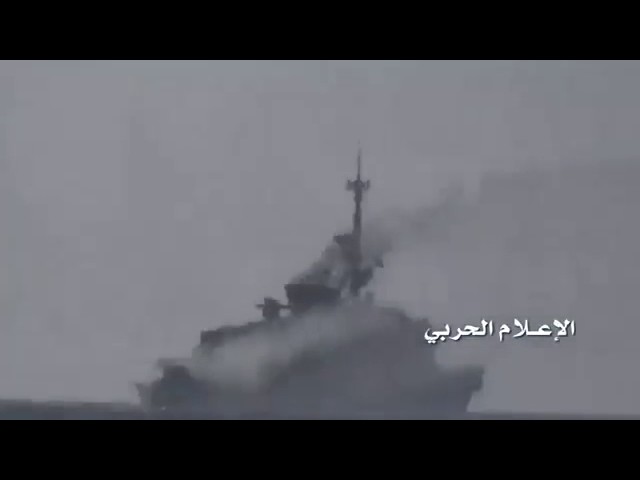 A Saudi frigate patrolling off the coast of Yemen was struck by what is dubbed as suicide boats but the Houthi Movement claims that it was a guided missile.

Two soldiers are reported to have been killed by the blast but the frigate was able to continue sailing. Saudi State media reported that that “the terrorist attack” was carried out by three boats but the ship was able to deal with them except for one which “collided with the back of the ship and exploded” thereby causing a fire outbreak that was later on brought under control.

The Houthi Movement has claimed responsibility for the attack. One of its officials stated that the ship was “hit with precision after an accurate surveillance operation off the western coast.”  That attack was filmed and broadcast on the rebel-controlled al-Masirah television channel.

The area of the attack has not been revealed but the Saudi-led coalition claims that the port of Hodeiba continues to serve as a launch-pad for terrorist operations at sea which poses a threat to international navigation and the supply of humanitarian and relief aid through the port.

Within a scope of five months, the Houthi Movement and its allies have launched three attacks. Last year, a US navy vessel intercepted a missile launched at it near the Bab al-Mandab Strait before retaliating. An Emirati vessel was also hit by missiles fired by the Houthis near the coast of Mokha when it was returning to the UAE from Aden. The rebels boasted that the ship was “completely destroyed.”

The Saudi-led coalition in Yemen is aimed at reinstating President Hadi as the legitimate president but the task is proving to be challenging since the launching of the military operation on 26 March 2015. The Houthis are still in control of the capital and other major towns. They also established a council that is overseeing the affairs of the territories under their control.