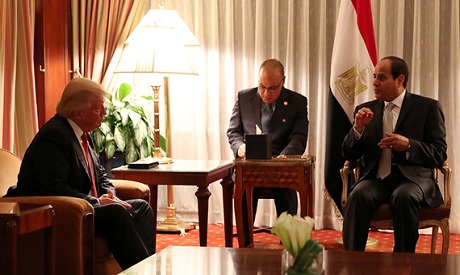 US President has underlined Washington’s military commitment towards Egypt during a telephone conversation with Egypt’s al-Sisi, reports say.

President Donal Trump Monday hailed his Egyptian counterpart for efforts to eradicate terrorism in Egypt, and primarily in the Sinai, according to Egyptian state-owned media al-Ahram, which quoted the Egyptian presidency.

Egypt is facing insurgency in North Sinai. Islamist groups and groups aligned with the Islamic State have been battling al-Sisi’ regime since 2013, when the Egyptian leader toppled democratically elected President Mohamed Morsi.

The insurgency has collided with the country’s economic challenges. Egypt’s flagging economy has hampered capacities to efficiently counter the terrorists.

The US president during his inauguration on Friday vowed to weed out terrorists wherever they are on the planet.

Despite human rights shortcomings, Cairo has remained a strategic partner to the US. President al Sisi was the first Arab leader to congratulate business tycoon the day of his election. Al-Sisi is the second foreign leader that Trump has called since taking office. The US leader also called Israeli Premier Benjamin Netanyahu, underlying his backing to Israeli illegal settlement policy.

The Egyptian leader also backed Trump’s suggestion to set up a database of Muslims in the US, arguing it would ensure “security and stability”, the New Arab media reports.