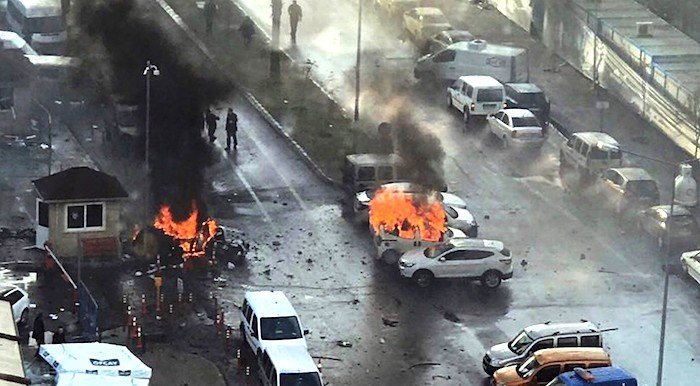 As the search for the attacker of the Reina nightclub continues, Turkey has been marred with another attack by “terrorists” in a car bomb explosion that killed at least two people and left seven injured.

The car was detonated in front of a police outpost in front of a court house in Izmir when it was being searched. Two of the assailants are reported to have been killed while a third one is on the run.

The Governor of the city, Erol Ayyildiz, said “information so far” obtained suggests that the Kurdistan Workers’ Party (PKK) carried it out following the review of the attack and the identification of the people involved. He also revealed that another bomb-laden car was safely defused near the scene.

Deputy Prime Minister Veysi Kaynak said the ammunition left behind by the assailants shows that they were seemingly planning “a massive massacre.” Two Kalashnikovs, seven rockets and eight grenades were seized.

No group has claimed responsibility for the attack yet but this week’s nightclub attack was claimed by ISIS. No major terror attack has taken place in İzmir over the years although security personnel have claimed to have repeatedly foiled plots by the PKK and captured several militants in possession of explosives and automatic rifles last year.

President Erdogan said the strings of attacks on the country are meant to bring Turkey “to its knees” before stressing that “they won’t be able to set people against each other. They couldn’t destroy our unity.” He vowed that the country would resist the “mutual attack by terrorist groups.”

Turkey was on the verge of becoming a top tourist destination in the world but significant number of attacks that took place last year have forced many to abandon the destination. With only six days into 2017, the country has already witnessed two deadly attacks with victims of the nightclub rampage being mostly foreigners.